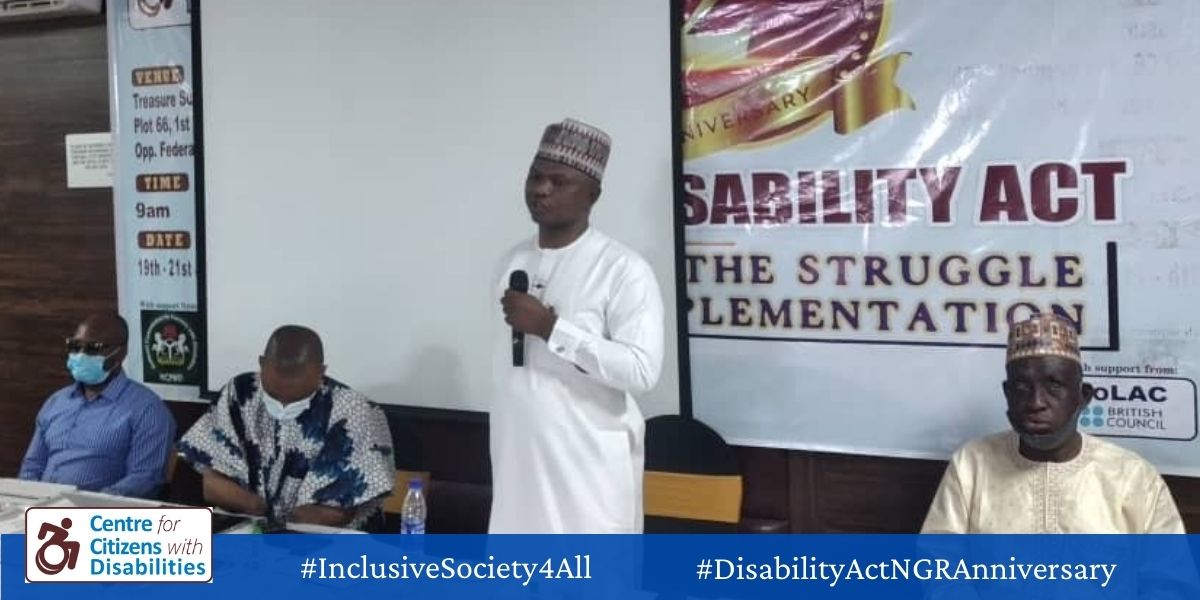 January 21, 2021 Written by admin. Posted in #DiasbilityActNGR, National Commission for Persons with Disabilities No Comments

The National Commission for Persons with Disabilities (NCPWD) says it plans to establish offices in the six geopolitical zones of the country towards actualizing its mandate.

Mr. James Lalu, the Executive Secretary, NCPWD made this known on Wednesday in Abuja during a 3-Day program to commemorate the National Disability Act Anniversary organised by the Center for Citizens with Disabilities (CCD), a Non-Governmental Organisation (NGO).

Lalu said that the meeting was aimed at gathering public opinions, suggestions, and contributions from Nigerians, especially the disability community towards effective discharge of the duties of the commission.

According to him, events like this will help guide us in establishing our zonal offices and also in setting policies that will aid our operations.

“We laud this initiative put together by CCD to commemorate the 2nd anniversary of the passage of the Discrimination Against Persons with Disabilities (Prohibition) Act 2018, and we recognise its outstanding contributions to the establishment of the commission.

“The establishment of the Commission has brought a very high expectation from Nigerians and especially the expectations from the disability community across the country have been heightened.

“That is why we are set to organise forums like this to share our experience and gather helpful contributions for the functioning and establishment of our zonal offices across the six geopolitical zones,” he said.

Lalu said that the commission would reserve 60 to 70 percent employment in the zonal offices for PWDs. This he said would give PWDs across the board a sense of belonging in the commission.

“Section 29 of the act provides that five percent (5%) employment be reserved across all sectors for PWDs both in Federal Ministries, Departments, and Agencies (MDAs), but sadly there has been no compliance since the passage of the law.

“So we would begin with our commission by giving well-read, qualified, and fit PWDs with high proficiency in required skills the chance of being employed and to work alongside persons without disabilities.

“We would adopt various strategies to achieve the implementation of section 29 which focuses on employment for PWDs and we believe line MDAs will emulate our activities in no time,” he said.

He urged CCD and other disability organizations to unify the disability community and to sustain the yearly celebration.

Lalu said that the commission would collaborate with CCD to make the celebration an annual event, which would form an accountability forum to assess the commission and the level of implementation of the provisions of the act annually.

Mr. David Anyaele, the Executive Director of CCD said that it was quite worrisome that line MDAs were not committed to the implementation of the National Disability Act.

Anyaele also said that it is sad that the National Assembly (NASS) also made minimal budget provision for the disability commission in the 2021 appropriation.

According to him, the NCPWDs would struggle without robust funding to attend to its mandate.

The challenge facing Nigerians with disabilities is so much that without a multifaceted approach, we would struggle to achieve the purpose of the National Disability Act.

“We appeal to President Mohammadu Buhari to give executive support by way of compelling federal MDAs to implement the concerned sections of the act through an executive order.

“We believe that the commitment of line MDAs to the full implementation of the disability act is the surest way of ensuring that citizens with disabilities benefit fully from the MDAs,” he said.

He called on the leadership of the NASS to support the new ad hoc committee on disability issues to ensure oversight of issues of critical concern to citizens with disabilities.

Anyaele appealed to NASS to be open to PWDs through access to communication, public hearing and through an establishment of a disability office at the assembly complex.

He reiterated that CCD remained committed to mobilising resources to support the commission to achieve its mandate and to support NASS to ensure effective oversight on the Act.

Anyaele also said that the group would continue to engage the disability commission, NASS, other disability groups, well-meaning Nigerians, local and international stakeholders to attract the needed attention for the improvement of lives of PWDs.