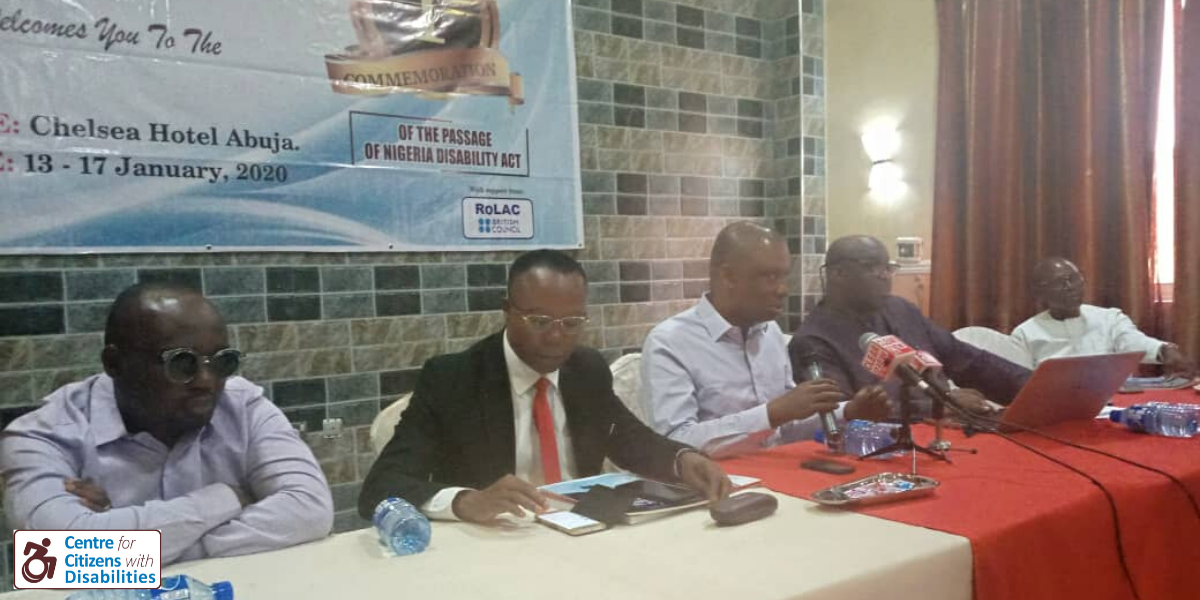 Communique Issued at the end of the Interactive Forum with Media Executives on the 1st Anniversary of National Disability Act held at Chelsea Hotel, Central Business District Abuja on Monday, January 13, 2020.

As part of the activities to mark the first Anniversary of the passage of the Discrimination against Persons with Disabilities (Prohibition) Act 2018, CCD held an interactive forum with Media Executives at Chelsea Hotel, Central Business District, Abuja on the 13th of January, 2020.

Participants at the event were women and men from the electronic and print media, made up of Abuja Bureau Chiefs, Editors, Deputy Editors and News Producers. Other participants include: women and men with disabilities from the physically challenged, blind, and deaf association as well as development partner, caregivers and service providers.

The activity is supported by the Rule of Law and Anti-Corruption (RoLAC) Programme, British Council. The objectives of interactive session with Media Executive are to identify areas of partnership and collaboration to ensure the full implementation of the Act recognizing the importance of the media in reaching out to the unreached, and to share with the media highlighting specific things that media can do differently to support disability rights and promote inclusion of persons with disabilities in democratic governance.

The Executive Director, Centre for Citizens with Disabilities (CCD), Mr. David O. Anyaele in his welcome remark thanked participants for honouring the invitation. Mr. Anyaele also thanked Nigerians with disabilities for the successful campaign for the passage of the National Disability Act on the 17th of January, 2019. Other guests at the event include Mr. Theophilus Odaudu, Country Representative, Disability Rights Fund and the Executive Director, Media Rights Agenda, Mr. Edetean Ojo.

Concerned that Media response for the implementation of the National Disability Act is low and many media organization do not understand the provisions of the Act.

Bearing in mind that many persons with disabilities and their organisations don’t have skill and capacity to engage the media on the implementation of the disability Act at the Federal and State levels.

Based on the above, the meeting resolved as follows:

Ginger/Engage the Federal Ministry of Information and Culture to begin public enlightenment activities;

Ginger/Engage the Government to activate the Persons with Disabilities National Commission;

Consider periodic /weekly programmes to create awareness about the act and its provisions;

Engage processes for approval of public buildings Example; National institute of Architects, Institutes of Builders etc. In the case were meetings are not possible, write letters to bring to their attention existence of the Act and share with Media bodies;

Where possible or relevant, use the Freedom of Information Act (FOI) to question government compliance, plans and budgeting as regards to implementation of the National Disability Act;

More sensitivity by the Media on the use of language in their reportage;

Create a contact list of Persons with Disabilities and experts who can speak of disability rights issues you can reach out to get views, comments on relevant issues;

OPDs should improve their knowledge and familiarity with the National Disability Act and relevant issues and should be willing to share their views and their experiences to the Media to deepen their knowledge;

Use existing programmes and sections to highlight issues of PWDs, by mainstreaming the issues of PWDs whenever policy issues are being debated.