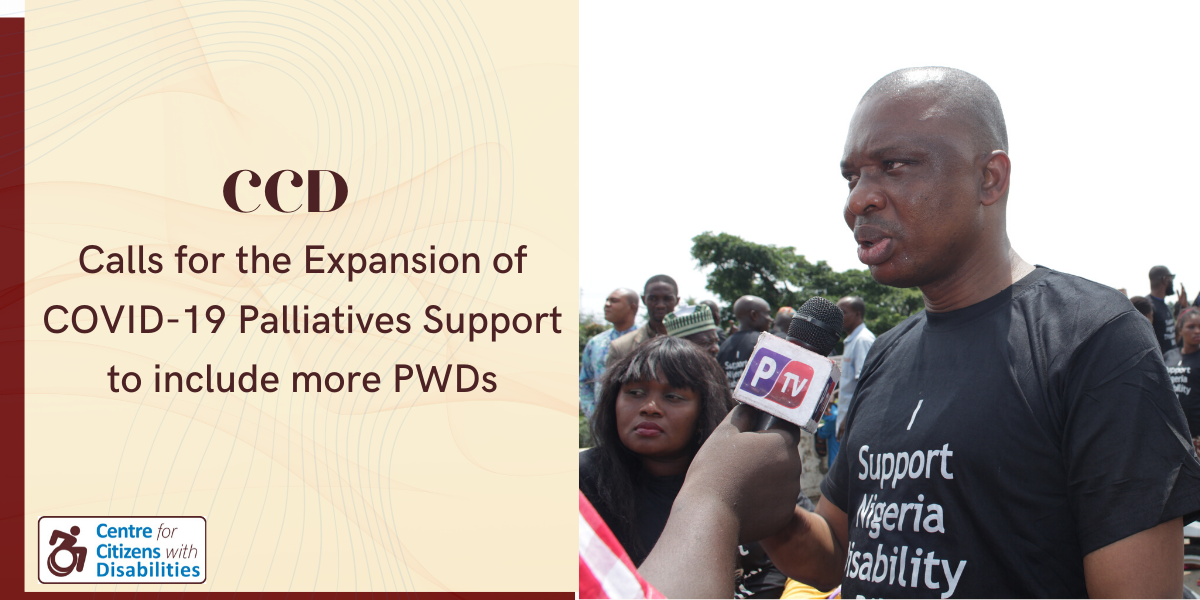 The Centre for Citizens with Disabilities(CCD) has called for the expansion of the Covid-19 palliatives in Lagos, Akwa Ibom, Enugu, Kano, and Kaduna State to include more person’s living with Disabilities(PWDs).

Mr. David O. Anyaele the executive director of CCD said the Centre designed the survey in other to access the Effectiveness of the IEC and Palliatives model in five states of the Scrap -C Campaign of the upright for Nigeria states, Which include Lagos, Enugu, Kano, Kaduna, and Akwa Ibom respectively.

He said it became necessary to carry out this Survey in all the five states of the Scrap -C Campaign State as PWDs were seeing on TV and Radio calling for palliatives and the Minister for Humanitarian affairs insisting almost everyone in Nigeria got the palliatives.

“COVID-19 First appeared in Nigeria 27 February 2020 and since health sector stakeholders, led by the federal government of Nigeria(FGN) have deployed three strategies consisting of medical, information, education and communication (IEC) and the Palliatives models to control it’s Spread”

As most information on the COVID-19 Pandemic was obtained from the TV, Radio, Faith-Based Organization in the five states.

The report showed also that handful of PWDs were invited to participate as beneficiaries of the palliatives that were distributed by the government at various levels and several private sector stakeholders.

While poverty was also a concern as many PWDs from the report were seen not to have access to the preventive measures put in place.

Also from the survey, PWDs were not carried along in the testing of COVID-19.

The report also reveals that the method use in the distribution of Palliatives wasn’t friendly for the PWDs.

Furthermore, the Centre made recommendations as follows;

1- IEC Strategies that are sensitive to the blind, deaf, and physically challenged Should be adopted to educate PWDs, they should be trained and involved in delivering the information to them through :

2-Provision should be made for the screening of PWDs for COVID-19 so that those infected can benefit from the treatment by the government.

3- Identify and train trainers and support them with necessary logistics to step down training to members of their community or Cluster.

4- Improvement in the Palliatives Distribution by the inclusion of PWDs in the Process.

5- Improvement in the process of communication to the beneficiaries of palliatives by involving the local PWD leaders Leaders in the process.

6- There is a need to re-design the administrative components of the COVID-19 Palliatives Support scheme with a view to effectively covering more PWDs as beneficiaries before they are compelled to adopt survival behaviors that are capable of undermining government efforts at controlling the spread of the disease, Which might be costlier.

7- National and start disabilities law should be leverage on to enhance the participation of PWDs in the distribution.

The press briefing had press men both from print and online newspaper, sign language interpreters, leaders of PWDs that were interviewed i.e the blind, the physically challenged and the blind all in attendance

CCD as an NGO for the PWDs has been in collaboration with the UKAID, ActionAid in the Strengthening Citizens Resistance Against Prevalence of Corruption (SCRAP-C) in Nigeria.

The online press briefing took place in the five states lasting about one hour for each state, starting from Lagos to Enugu, Akwa Ibom, Enugu, Kano, and Kaduna.