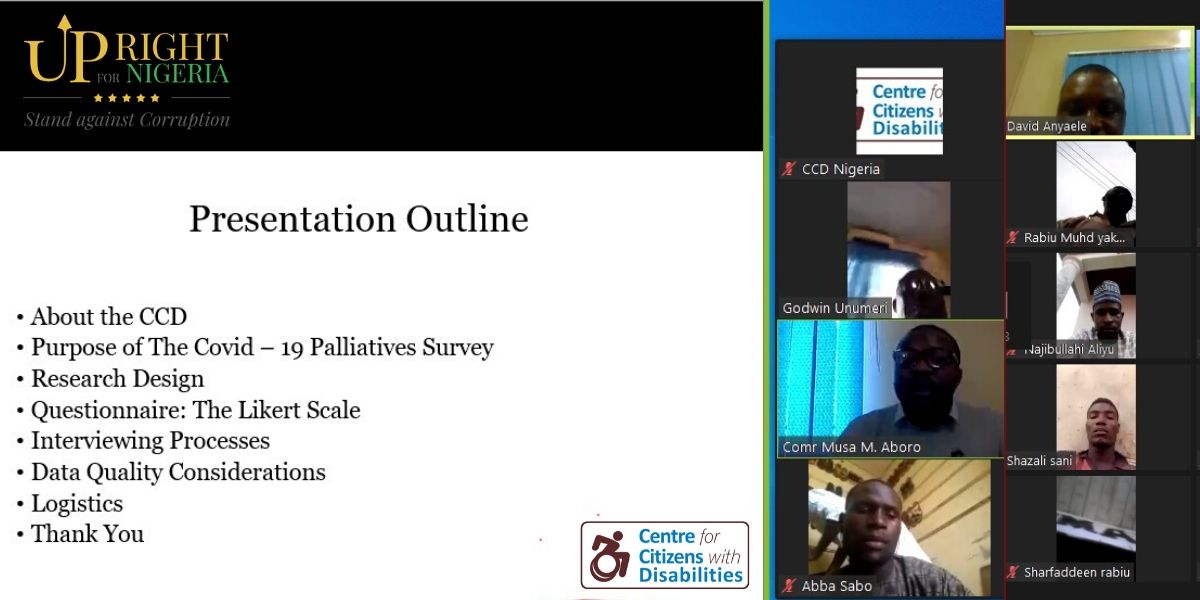 CCD tracks distribution of palliatives amongst its members in Akwa-Ibom, Enugu, Kaduna, Kano and Lagos States

The Centre for Citizens with Disability (CCD) says it will conduct a survey to track the distribution of palliatives amongst its members in Akwa-Ibom, Enugu, Kaduna, Kano and Lagos States.

The Director of the Centre, Mr David Anyaele, said this on Tuesday at a virtual training conducted for its members in the five states.

Anyaele explained that the Centre has the mandate of promoting human rights, demanding accountability and transparency, fighting corruption as well as fighting discrimination.

According to him, the Centre will evolve a strategy to monitor the distribution of palliatives among its members in the these states.

He said that the Centre used interpreters to ease communication and enable its members to take part in the survey.

While speaking on tools to be used in the survey, a consultant with the Centre, Mr. Godwin Unumeri, cautioned members on how to identify false information in order to abstain from gathering fake and false data during the survey.

Unumeri said the survey will be conducted soon, but he did not give a specific date.

Established in 2002 in Lagos, CCD works to promote independent living, human rights and social inclusion of persons with disabilities in development efforts.

It was incorporated with the Corporate Affairs Commission (CAC) Abuja as a charity organisation and it is recognized by Federal and States Ministries, Departments and Agencies in Nigeria as a credible NGO working on disability matters.