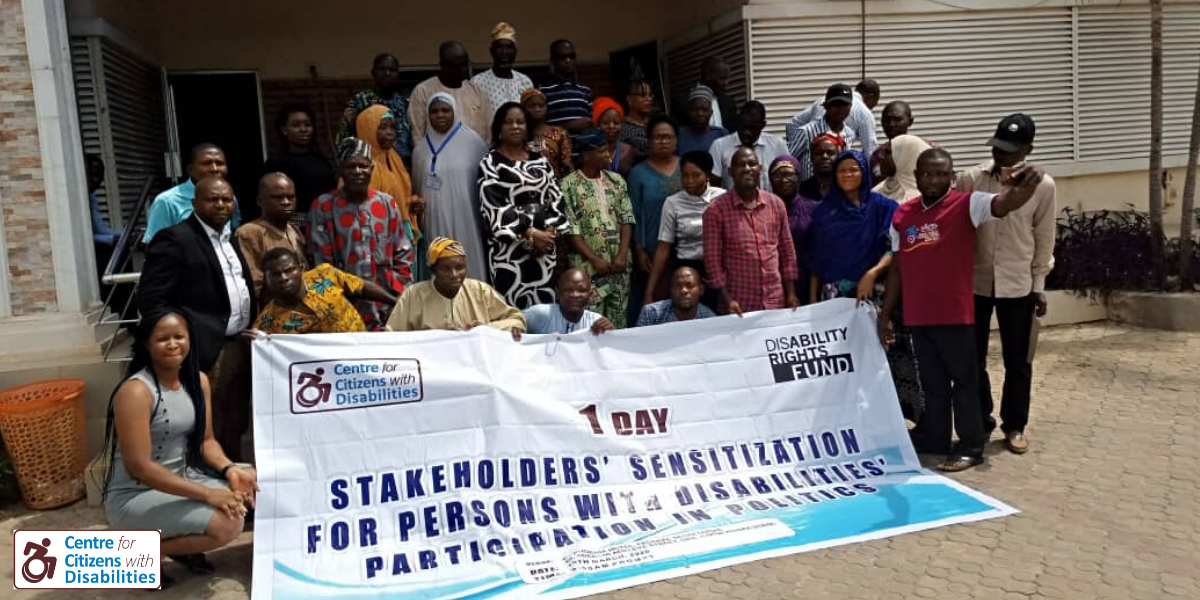 CCD encourages People With Disabilities to participate in politics

March 21, 2020 Written by admin. Posted in #DiasbilityActNGR, News No Comments

Mr. David Anyaele, the Executive Director, CCD, canvassed this at the stakeholders sensitisation programme organised by the centre on the need for PWDs’ involvement in politics in Ilorin.

Anyaele said in his welcome remarks that the purpose of the programme was to discuss the need for PWDs participation in politics to advance their course.

Anyaele, represented by Mr Kola Ogunbiyi, the Programme Manager of the centre, said that there was need for PWDs participation in politics and governance in the state.

According to him, this has become necessary since engagements with government officials to address the needs of PWDs is not yielding the desired results.

Anyaele said that this informed the invitation of political parties to be part of the sensitisation programme.

He said the meeting, which was made possible with support from the Disability Rights Fund (DRF), was a call for the incorporation of people with disabilities in the mainstream politics.

“We want to commend the state governor for his visit to Kwara State School for Special Needs within a short time in office.

”This shows that the government has the people with disabilities in mind.

“However, we have been making efforts to meet the governor and other relevant people in government, and it is yet to be fruitful,” he said.

The executive director also called for the establishment of a commission for disability in accordance with the dictate of the state Disability Law 2017.

Mr Bashir Yusuf, the state Chairman of JONAPWD, commended CCD for facilitating employment for its members in Lagos State.

He also commended the role it played during the 2019 governorship election in Kogi state.

Yusuf said that PWDs never wished to resort to begging for a living, but that the environment was not conducive to ensure a better living for them.

“We have a law on disability in this state, but unfortunately this law is yet to be fully implemented.

“We want to seek for the full implementation of this law to guarantee the rights of the people with disabilities,” he said.

Dr Abiola Adimula, representing Becky’s Foundation, said the foundation had organised a similar programme in 2019, where the executive, legislative and judicial arms of government were engaged on the plight of the PWDs and the need to implement the law.

Mrs Jumoke Olaoye, the state Coordinator of the National Human Rights Commission, said that the PWDs were entitled to the same rights and privileges that are due to able men and women.

She said that the commission was ready to promote, protect and enforce the rights of the PWDs anytime its attention was needed.

Olaoye said this while delivering a paper on “Challenges that Underpin Political Participation for PWDs in Kwara State: Way Forward for Inclusion”.

NAN reports that JONAPWD members, who spoke at the programme, also called for the implementation of the Disability Act 2017, particularly the five per cent slot for employment at every level of government.

The report added that the stakeholders were happy with the initiative of the centre.