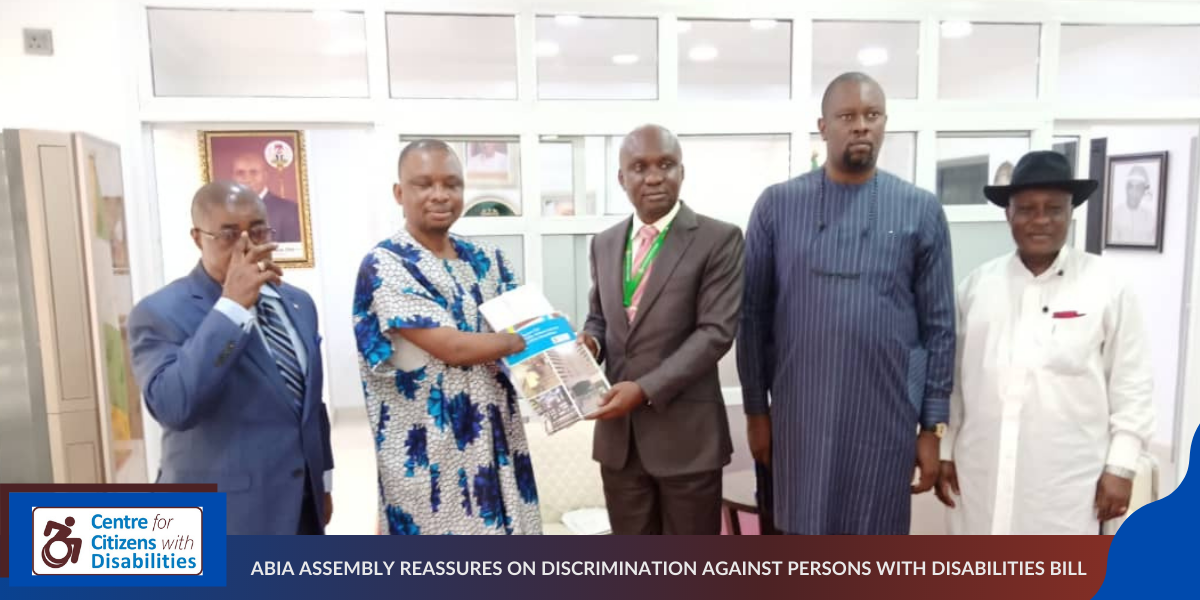 ABIA ASSEMBLY REASSURES ON DISCRIMINATION AGAINST PERSONS WITH DISABILITIES BILL

The Abia State House of Assembly has assured that it was working towards passing the Discrimination Against Persons with Disabilities Bill shortly after Easter break.

The Speaker Chinedum Orji, gave the assurance when the management of the Centre for Citizens with Disabilities (CCD), paid him a courtesy visit in Umuahia on Monday. He said that the 7th Assembly was committed to promoting peoples-oriented bills as witnessed in the recent bills passed, particularly the Abia State Violence Against Persons Prohibition Bill.

Earlier, Executive Director of CCD, Mr. David Anyaele said the visit was to appreciate the speaker for the progressive bills passed since the inception of the 7th Assembly. “We are pleased to note the recent Diaspora Bill, and in particular the Violence Against Persons Prohibition Bill, aimed at protecting the weak and vulnerable group from all forms of harmful practices. We are excited to note that Abia State Disability Bill has passed second reading, awaiting final reading,” he said.

He said it would also put the state in the map of disability friendly states in Nigeria and urged the speaker to ensure that the bill was passed without further delay.

The CCD director called on the house to take appropriate measures to ensure that lawmaking, oversight and representation functions were accessible to persons with disabilities.

“This can be achieved through audit of legislative processes to ensure access, participation and mainstreaming of disability issues in the assembly,” he said.

He equally urged the House to employ a Sign Language Interpreter to enhance communication for the deaf community in the state.

He assured that his organisation, in collaboration with its partners, would support the House in its legislative activities to ensure no one was left behind by reason of disability.